It’s hard being a musician. 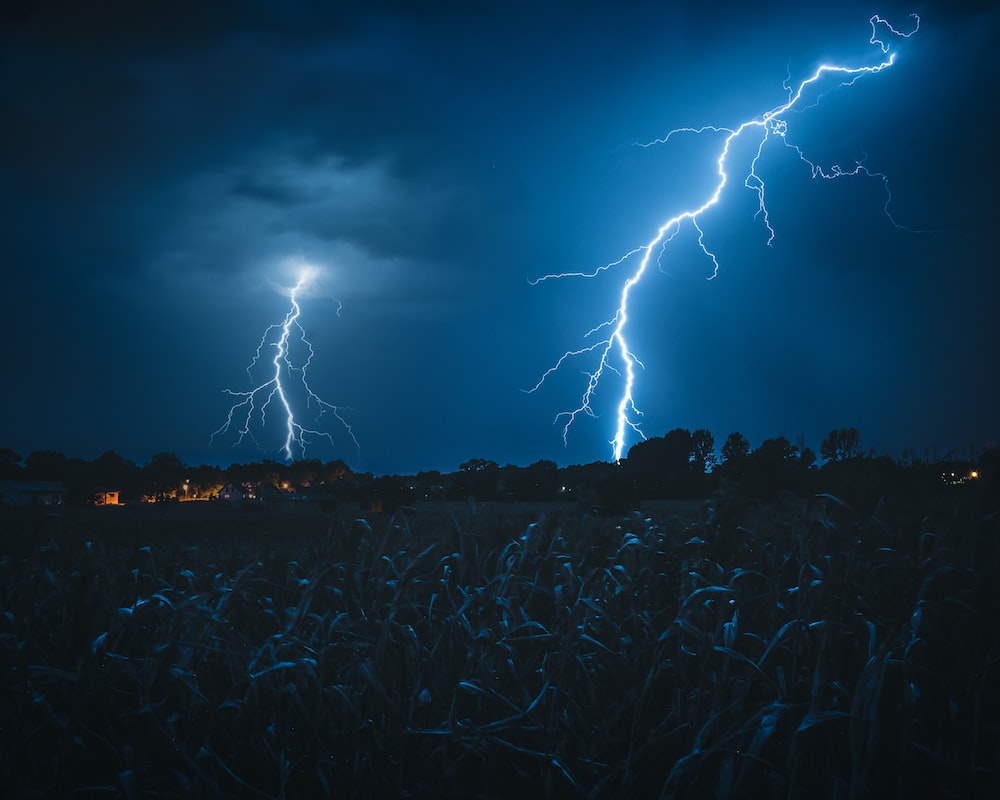 Or any artist, really. You have more of a chance of being hit by lightning than you do of succeeding. And yet, us musicians and artists carry on.

May I say, it helps if you’re one of the lucky few who are born at the right time and in the right environment. Remember Malcolm Gladwell’s “Outliers”? In that great book, we learned that Bill Gates was surrounded by fellow programmers. Steve Jobs was in Silicon Valley where there was an engineer basically in every garage.

I was and still am one of these delusional “artist” people. Believe me, if I could, I would be an engineer. But my brain neuron pathways are so well tread when it comes to music that everything else just sort of feels impossible.

I mean, it’s always been there for me. Beethoven sheet music. The Beatles on the record player. A Behning New York Upright Grand Piano sitting there in the corner of our house, in what we called the Playroom.

When I was about 22, I remember going to see a father and son playing music in East Helena, Montana, in a little bar just on the outskirts of town, there. No one was there except for me. And I was mesmerized by what they were doing! 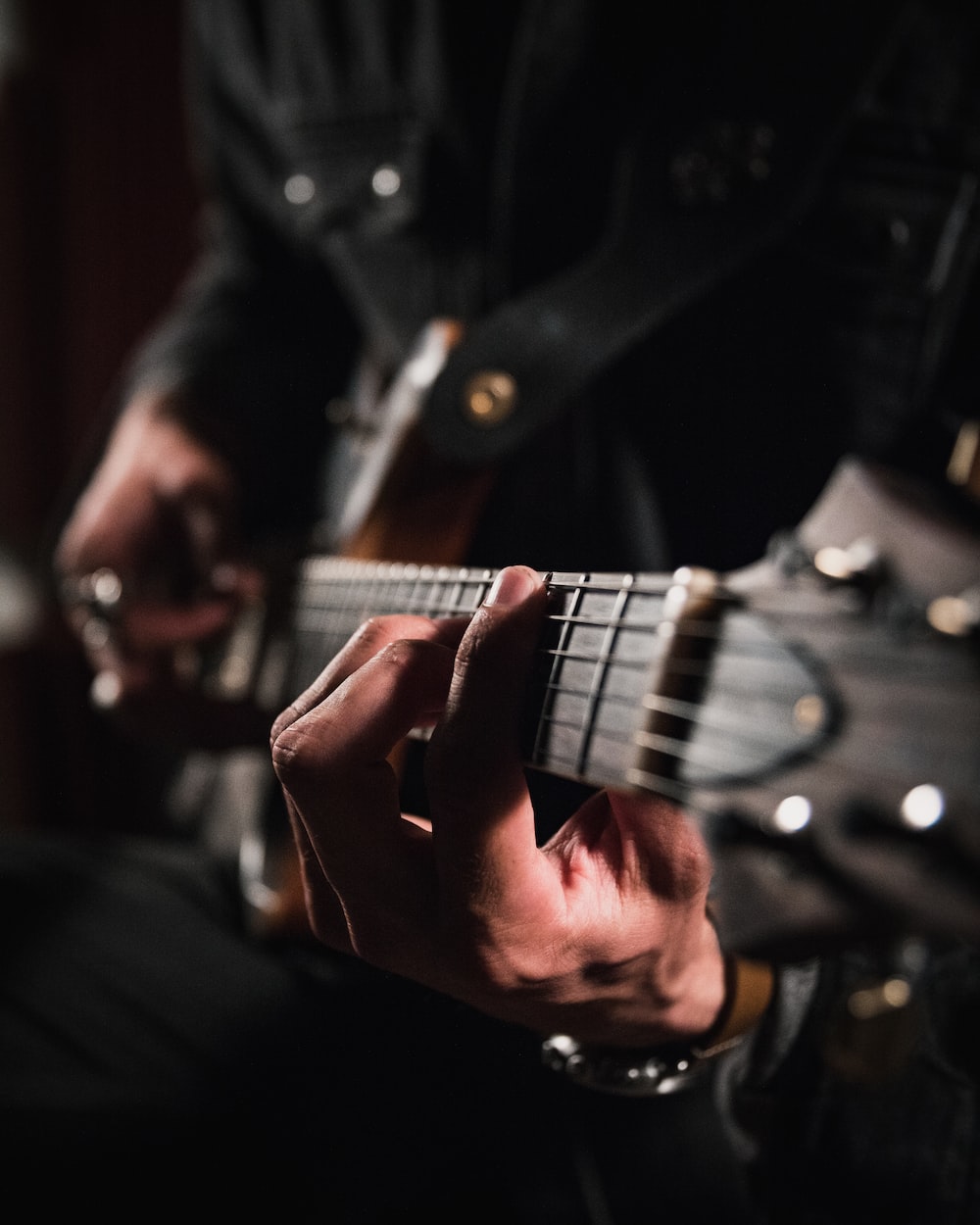 And I noticed something.

It didn’t cost this father and son 10 million dollars to create the beautiful art they were creating. Unlike movies, I thought. I had just gone through the ringer in Los Angeles trying to break into the movie industry. It felt impossible to make my art because I kept running into walls trying to get other people’s permission to shoot a movie.

But these guys didn’t need permission. They were unleashed. Time stopped for them. They were outlaws living in a different reality than everyone else. While most people were thinking about how to pay the bills, songs were being composed in their heads. Probably in the back of their heads, there.

And I guess I recognized that. And I wanted that. And so I went to go and pick up a guitar the very next day.

“I can’t imagine a life without playing an instrument.” -Einstein

So I just started playing in my parents’ house. How generous of them! Perhaps they thought I was lost. He must be just self-regulating. In a ways, I was somewhat lucky just like in Gladwell’s description of Bill Gates or Steve Jobs in that there were these musicians on the outskirts of town I could go listen to. I did have parents who would support this “lost boy” of sorts. And there was a guitarist I could go listen to in every coffee shop. Yes, that used to be a thing before Netflix.

And I learned to improv by improv’ing. Another word for this is simply tinkering. I was tinkering away. Just sort of playing like a mechanic tooling around on a car or a child playing with her Barbie dolls for hours on end.

I took tiny round, blue stickers and put them on my guitar to make every string an individual piano. This is how I learned where the notes are on the guitar. I saw the guitar as sort of a Rubik’s cube – and I think most guitarists sort of always do. Versus – the piano is linear, it’s easy to compose, it makes sense.

You really need someone to show you the guitar if you want to unravel its secrets quickly. Otherwise you risk falling into the vortex of trying to figure out how it works, even on a basic level, for years on end. Enter me. Yes, I enter here on this spot.

The Rubicon – n. Point of no return

And that’s okay. I would joke to my friends how I loathed the guitar because I couldn’t play it like I could the piano, even after all those years of work. And now, like 25 years later after off and on again tooling sessions, I can’t get enough. Finally. It makes sense to me.

I can tell you how it makes sense, but because it took me so long to play it like a piano, we have entered the realm of forbidden knowledge. A Samurai doesn’t go around giving his 25 years of tinkering secrets to just anybody. And these secrets are the same as what you might find in a company like Tesla. Trade secrets. Artists are doing the same thing. Our Teslas are our music compositions, our pottery, our books, our art.

I memorized “Moonlight Sonata” a couple summers ago on the guitar …

Which, by the way, was one of the great highlights of my life. I remember at the time, how I would stare at Picasso’s painting of The Old Guitarist. 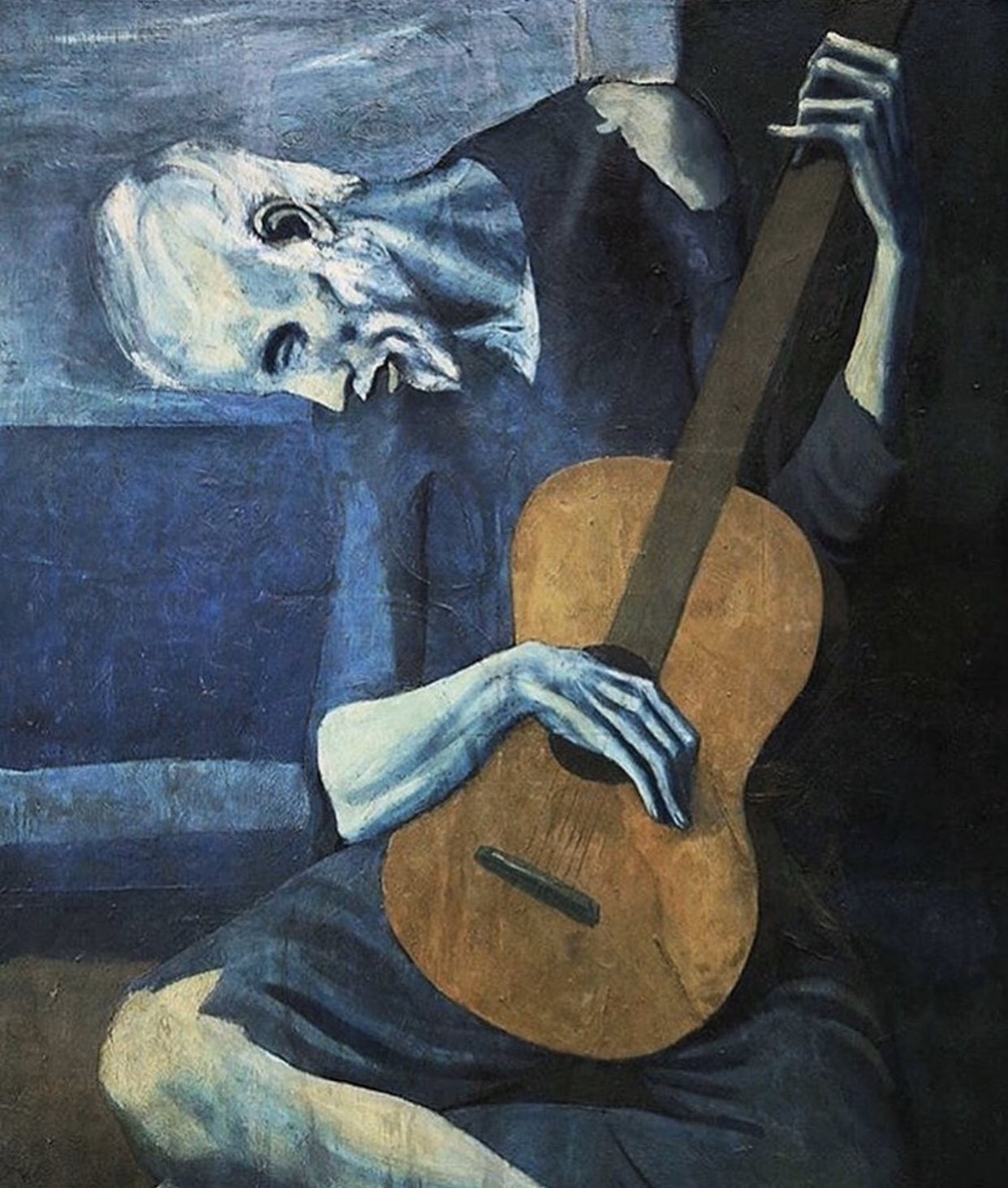 The painting, with its harsh angular curves, is apparently a commentary about the plight of the downtrodden. That is, those who suffer from the misery that comes from being poor. Seems rather apropos being a musician?

But that wasn’t my focus at the time. At the time, while memorizing Moonlight, my focus was on the fucking magic of the universe.

Time stopped. If you want to know what it felt like, watch Milos Forman and Peter Shaffer’s movie “Amadeus – The Director’s Cut”.

There was a magic to that movie.

Maybe that old man in The Old Guitarist wasn’t quite as downtrodden as well? Maybe that’s just what we saw on the surface? Inside he was playing Amadeus?

I wonder if I will be that old man, I thought. I hope I am, I said to myself, thinking of Picasso’s psychology as I memorized Beethoven. He’s really living.

And to this day, just like those musicians in that little bar on the outskirts of East Helena, I always have a song in the back of my mind. Sometimes I ask myself, “I wonder what it would be like to not have a song that I am writing in the back of my mind? What are those people like who don’t have this? Oh how boring. To be living in the moment in constant silence. Without a soundtrack.”

This reminds me of that story about the traveling musicians who stop in front of a house on a cold winter day. It’s Christmas. And they can see inside the window – there is a family inside who are gathered around the tree and drinking apple cider.

“Hey Jim,” one of the musicians says, clutching his saxophone. “Look at this. Can you believe this?”

Jim comes over. He looks in the window at the family and shakes his head. “Yes,” he says. “Geez.”

Then the musician says, “We’re so lucky we’re not them.”

And they grab their instruments and head off into the night. It’s time to jam.