As a therapist in Missoula, one of my favorite authors is Brene’ Brown!  She has recently come out with another book called “Braving the Wilderness: The Quest for True Belonging and the Courage to Stand Alone”. And the title is perfect because the rest of the book uses that title as a platform to jump off of. I’ll tell you what the wilderness is a scary place and not without reason. There are bears. So how do you get the courage to go and do it – alone. And to in essence become one with the wilderness. To become the wilderness. 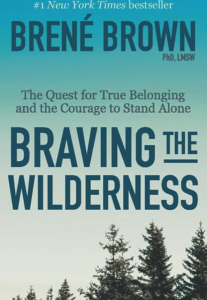 She talks about an interview with her hero Maya Angelou when Dr. Angelou was interviewed on public television by Bill Moyers in 1973. When she said, “You are only free when you realize you belong no place – you belong every place – no place at all. The price is high. The reward is great.”

When Brene’ heard this she thought “Why would she say that? That’s not true. Belonging is essential. We must belong to something, to someone, to somewhere.” And it stirred in her an anger where she realized not fitting in was a source of her greatest pain growing up. Do you ever feel like you don’t belong anywhere?

How about in today’s political climate where there are these strong divisions? You get on Facebook and the anger is so intense. Where we tend to dehumanize the other party, don’t we? “How could they think that?” “How could HE do that?” “How could SHE do that?” And so here we are focusing on these exterior events that cause us pain rather than looking at our own lives and addressing what’s inside. Because we all feel and wrestle with this feeling of being alone. Not to diminish the fact that what others are doing may be wrong, we need to have boundaries, but Brene’ does talk about the pain that we carry from suffering – particularly when we don’t belong or don’t have a place to fit in.

For example, people try to tell Brene’ what to do at speaking engagements. “Uh hey can you speak here for about 45 minutes? But can you please not cuss?” “What?” “Yeah this is a conservative group. And the won’t like that.” And then when she goes to speak at a more liberal outlet, they say to her, “Hey can you speak for 45 minutes and can you please not talk about faith. We believe in that hokus-pokus.” So suddenly once again, she finds herself not fitting in.

But that’s the idea, you see, of being in the wilderness. Of being alone and not fitting in – is a beautiful thing. Because if you don’t fit in anywhere, then can’t you kind of do what you want? Aren’t you kind of tired of moving when you know your trunk belongs in this river? Have you been watching Jim Carrey lately? Holy shit, what is that all about. (Brene’ loves to cuss.) He’s being himself. He goes into a fashion outlet to watch women modeling and he tells a TV interviewer that all this is fake. She can’t handle it. Of course. She’s the cheerleader with the sparkles and makeup. But he’s an outlier now. Hollywood won’t hire him, hardly because who wants a guy who speaks the truth? 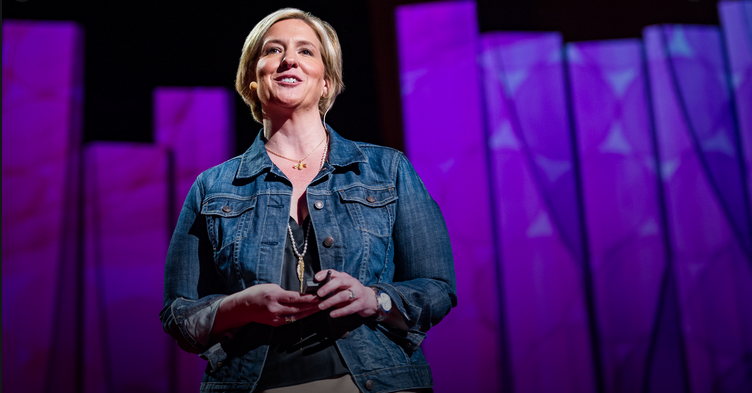 So back to Brene’ who says that three outcomes to the suffering that comes from not fitting in, particularly from those you love and those people who you call your family or your tribe. She says:

1. You live in constant pain and seek relief by numbing it and/or inflicting it on others
2. You deny your pain, and your denial ensures that you pass it on to those around you and down to your children; or
3. You find the courage to own the pain and develop a level of empathy and compassion for yourself and others that allows you to spot hurt in the world in a unique way.

And so we are as a society breaking into nodes, into factions, aren’t we? Geographically, we’re even living in places where there are people who are more like us. “On this side of the state it’s republican and on this side of the state it’s democrat.” And so when we see these differences again, we want to lash out and dehumanize. But Brene’ says it’s time we stop doing this and start RE-humanizing. And recognizing the pain that is out there in your own unique way.

Because if you’re liberal it’s easy to say “Hey the other side is completely crazy. They are a bunch of white supremacists who are catering to Nazis.” Oh, except for those two guys who work down the hallway from me who talk about “Star Wars” with. Those two guys are awesome. If I had a problem at 2 in the morning and I called them up they would totally back me up. And if the Chinese ever invaded America like in “Red Dawn”, the new one, I would totally go out into the woods and uh … You see what I’m saying.

And if you’re a conservative it’s easy to say “Those spineless democrats want to make the government pay for their healthcare so they get it for free without working for it. In fact they want free handouts so they don’t have to work and be lazy.” Except for that one guy who works down the hall from us, he gets up at 4 in the morning and starts working on his business so that one day he can employ an army. He’s a nice democrat who would have my back if the Chinese ever invaded.

You see what I’m saying? We’re fearful of the other side rather than addressing our pain and speaking our voices.

You should read this book “Braving the Wilderness” – to become your own wilderness, to become wild, just like Maya Angelou told the author: “You’re doing important work. Keep doing it. Keep talking about your work. Don’t stop and don’t let anyone get in your way.”

Like a tree planted by the river, do not be moved. Brene’ writes: True belonging only happens when we present our authentic, imperfect selves to the world, our sense of belonging can never be greater than our level of self-acceptance. Being ourselves means sometimes having to find the courage to stand alone – to brave the world of uncertainty, vulnerability, and criticism. And to remember that you’re never really alone at the same time.

And then she says, “We’re connected to one another by love and the human spirit and we are part of the same spiritual story.”

What a cool book.