How to Survive the Holiday Dinners 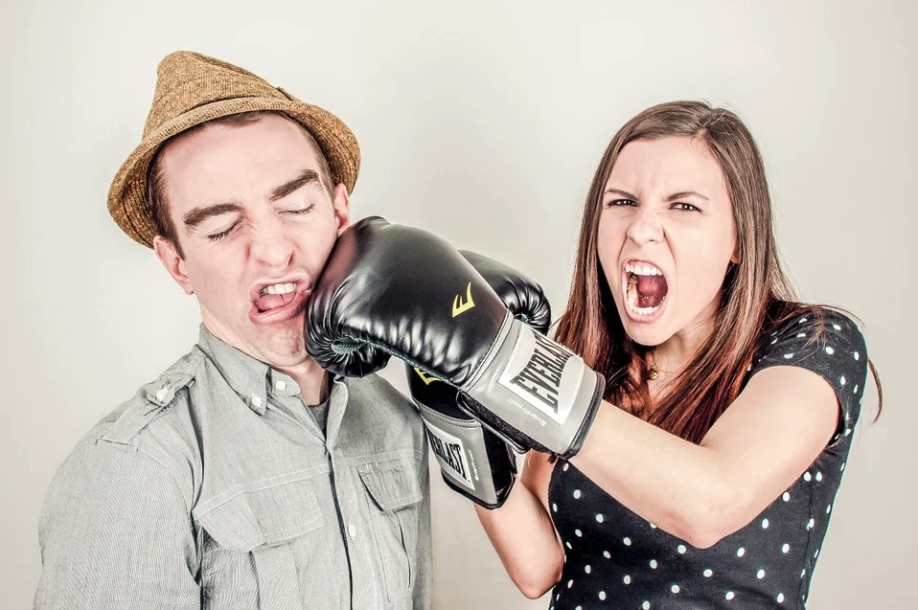 Here we go. We can feel it already. There are all these families who are getting together. And the tension is building already. Whose house are we going to? And for how long? Why do you get to call the shots and I don’t? And we’re being triggered left and right. Shouldn’t we be better at this by now?

And then, at some point, we might inevitably feel attacked. This is usually by a problem person. They just can’t … hold … it … back.

I used to deal with “problem people” who hurt me by, well – attacking back. I know. Really mature. But. Isn’t it kinda how we’re raised?

In martial arts we hear, “A good defense is a good offense.”

I mean, it’s worked in the past, too. I remember, I protected myself from bullies growing up. I would lash out and act all “crazy eyes” like Mel Gibson.

One time, if I can recall, my best friend back in high school, Justin, was duct taped up – really high – up on the side of a tree by the Senior wrestling team. And they were just taunting him and looking for another victim.

Without a second of hesitation, I walked up to the head wrestler, a no-necked Goliath. He quickly knocked off my glasses and called me a nerd. I couldn’t see. Rather than run, I stood my ground and went ballistic on him. I told him I was going to literally kill him. And he could hurt me now but you have just signed a death sentence.

He didn’t know he had run into Dirty Harry.

By the way, this is what you’re supposed to do when a black bear comes toward you on the trail. Make it seem like you’re bigger than you are, wave your arms around, act boldly and yell and whatever you do – don’t run. Because then it would see you as a food source, if you ran.

This technique worked great when I was in high school dealing with high schoolers. But at some point – I guess I grew up? Again, it worked well as a protective mechanism for all of the adolescent years. But you can’t exactly act the same way at the Thanksgiving dinner table years later.

Even if – that’s right – even if someone calls your wife a “dick” at the dinner table. I know. It’s hard to believe that someone would do this. But I’ve experienced it!

When Things Get Crazy

So there I was, and my wife was telling a story – a really good one – when, out of nowhere, one of the people at the table called her a dick!

I couldn’t quite believe it. I think I went into fight flight or freeze mode. And my mind was going back and forth like a computer that couldn’t make up its mind.

Has this sort of thing ever happened to you?

You want to go ballistic on that one dysfunctional relative though, don’t you? How dare he call your wife a “dick”?

Especially with me, I’m hyper-protective. If someone crosses the line with my family, I appear to have a meltdown internally. It triggers Mel Gibson and Dirty Harry all over again. This is because I love my family. I can’t stand to see them not treated right.

“Honey, why are we going to Thanksgiving again? That one guy’s going to be drunk. And going to cross the line.”

How do we get through this

Back in the olden days if somebody said something I didn’t like, or if I felt they were attacking me, persecuting me, or even trying to condescend me or my family – then I had a typical response. I would simply list a bunch of whataboutism’s.

That is, I would literally tell them, or email them a list of why they suck.

This is basically how I would deal with bullies as an adult. Long whataboutism lists crammed right up their butt. But, this of course just blows wind on the fire and good luck on now making it through dinner.

Now notice, I thought, sitting there at the dinner table. I could go all Dirty Harry and jump in. But everyone seemed pretty happy.

Granted, he, the relative, called my wife a “dick” … but everyone seems to be “happy”.

My wife has laughed it off. The dinner is technically not ruined.

“And if I say anything now I become the persecutor. And it’s a big fight,” I say to myself.

From my perspective, he’s the persecutor.

A persecutor is not seeing the other person as the beautiful person they are. A persecutor is like being a drone operator. You know those guys. They’re in charge of a video game stick and a keyboard that lobs missiles at its victims.

“3 two niner this alpha one. Ready to deploy. Waiting for command.”

So there’s a great book called “Ted: The Empowerment Dynamic” that I think you should read. 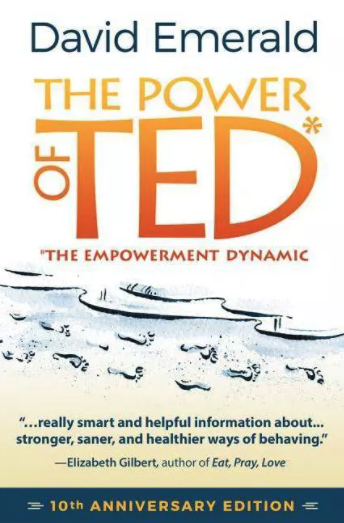 There are a lot of things it says. But one of the ideas that struck home with me, was the Karpman Dreaded Drama Triangle. 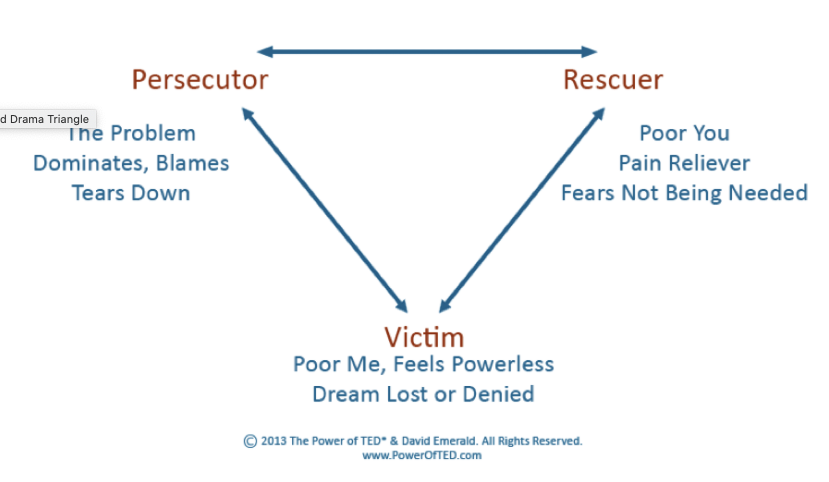 We are all sort of trained to fall into Victim mode by a Persecutor. It is then up to the Rescuer to save the Victim. Sound familiar? Maybe like every fairy tale you’ve ever heard? There’s a damsel in distress (Victim) who needs her Knight (rescuer) to save her from the Dragon (Persecutor).

We all love that Damsel don’t we? But the problem with this dynamic is that our compass is oriented toward a Victim mentality. A “poor me” mentality.

We need to fix this by re-orienting our compass toward a Creator mentality. So instead of Victim, Persecutor, and Rescuer – we now orient our compass as Creator, Challenger, and Coach.

A Creator sees the person they are talking to as co-creators. No longer are we drone operators. We empathize with the other person.

Granted he called my wife a dick. But 95% of the time he’s just great. And no one else appears to be reacting like I am. Everyone appears to be happy, even my wife. Maybe he didn’t mean it. Maybe he was “joking”.

Make the Persecutor a Challenger

I don’t want to stay a Victim. The more I continue to focus on the problem of him calling my wife a dick, the more I’m a Victim. This is because I want to save her. I want to become the rescuer, just like in high school. And thus I’m thrust into the triangle.

And when I become the Rescuer, as you recall, I’m like Dirty Harry. And there goes dinner.

So how can I reorient my compass?

Well, I can start by not calling him, the guy at dinner, a Persecutor. Let’s instead call him a Challenger.

What can I learn from this?

The Constructive Challenger is the person who knows what they’re doing. These are wise people. They are prompting you in their language and in their intent to help and make you grow. This is like the wise History teacher or your coach back in High School who asked you questions that you didn’t want to hear. But they were right on.

On the other hand, a Deconstructive Challenger is that one tornado relative who is totally out of control. He’s the one who calls your wife a “dick” at the dinner table.

Again, in the olden days, when the Deconstructive Challenger would attack me or my family, I would give them a list of reasons why they suck much more than me. Which kept me in the Victim role. And from their perspective, turned me into a Persecutor. I was just defending myself by lobbing much bigger bombs.

So what can this teach me?

Well, instead of becoming the Persecutor this time around, my normal response, who sends them a long email list of why they suck, I can instead this time have a re-do. I can come from the place that I’m a Constructive Challenger as well. Meaning, I want that person to learn and grow from our interaction. I want the best for that person. I’m not there to win a battle. I’m not there to tell them why they suck for crossing the line.

Yes this is one solution.

And it’s better than being stuck in reactive mode. Because reactive mode ends families and friendships. (Reactive mode doesn’t see the person you’re talking to even as a person.)

There is something to be said for making a deal before the dinner starts. “Hey can we just keep it light and polite? And not discuss politics because it makes me uncomfortable?”

If they say they can’t, then this says something.

“Oh but I can’t be light and polite. At some point I’m going to want to be deeper with you,” the deconstructive Challenger says.

“Can you still be light and polite without hurting people?”

“How about this: I’ll just remind you, ‘Remember our deal’ and if you can do it then we’re so in. Because we absolutely love hanging out with you. I’ll do my best as well too. Because I don’t want to hurt your feelings either.”

“You can start by not calling my wife a dick,” I say.

And this elicits some laugher.

“Because we all want to see you. We think you’re awesome,” I say.

And hopefully he agrees.

And so our goal is to empathize and have compassion – and to see the other person as equal beautiful Creators just like we are.

None of us are eloquent enough, or PC enough, or sane enough. We’re all a little bit crazy. So the key is to look past our divides and to see the big picture. Because if we can heal and make our relationships strong – if we can all do it – then our community becomes beautiful.

If you need help processing through the holidays, give one of our Missoula counselors here a call and we’ll help you to get through it.