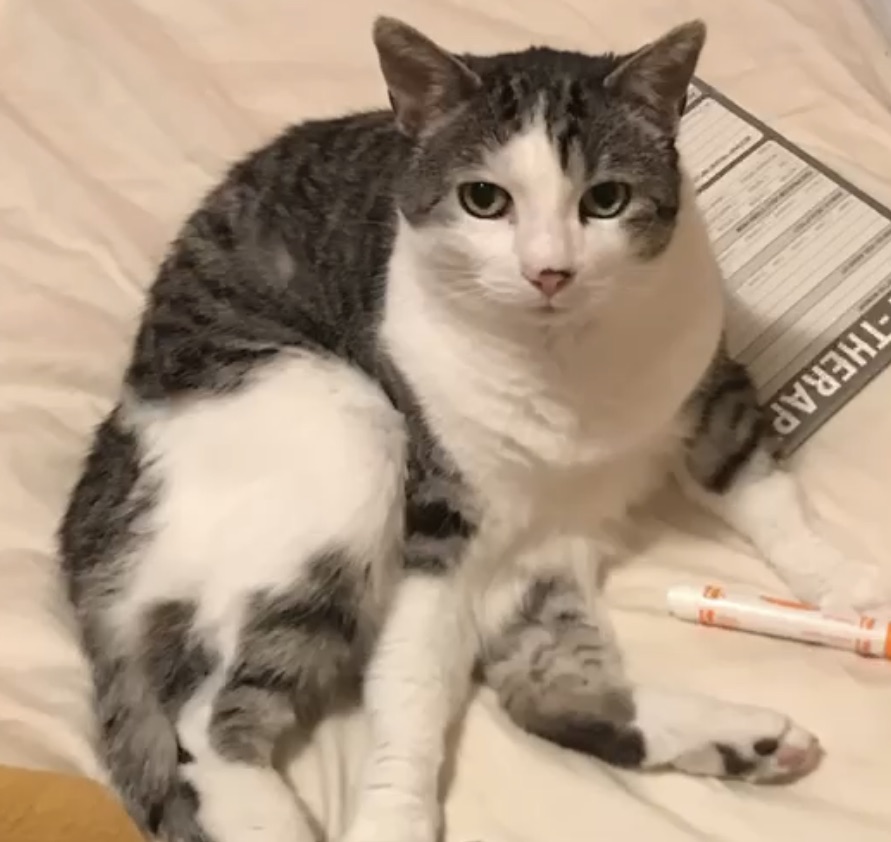 So our cat, Sophie, has been diagnosed with kidney failure.

I knew something was wrong. Smaller stools, lack of urine, and more lethargy. And as with any possible loss, I was and am still in a state of denial.

Add to this, the vet found a heart murmur which could be indicative of heart failure. Her levels are very bad, and so it’s just not looking good for our dear Sophie.

Dear Sophie who used to be my super cuddle buddy. She kind of got pushed out when the kids came. Kind of? Isn’t that the understatement of the century, I can see Sophie saying, if she could talk. It’s kind of like an episode of Toy Story.

And in my persistent way, I asked the doctor, the vet, if there were any other alternative methods we could pursue. She said, “There are people who get their cats kidney transplants. I will look into it on my end.”

And yes, I love Sophie so much, I actually called some of the very few hospitals in the United States that perform cat kidney transplants. Wisconsin is closed because of Covid. But the Georgia receptionist got back to me the next day.

“I’m going to send you a list of the qualifications. It is quite the process,” she said.

“I know. And we probably don’t have time. Sophie is so lethargic as it is. But we have to try. I will pretty much do anything to save her.”

“Yes! Do! We have people who fly in from all over the world for kidney transplants. From the other side of the world.”

“I’ll send you an email with the qualifications.”

She sent the email relatively fast. I looked at the levels needed that were stated in the attachment. Sophie was way past the one level I could recognize. It needed a 4 and Sophie was at a 19. I thought, “Well we could put a bunch of fluids in her and see if they go down.”

And then I looked at the ages in the email: “We prefer cats who are 5-10 years old.”

I asked my wife how old our cat is.

“15,” she said. “Well I don’t know. That’s a guess because the person who adopted her said she was about 3 after they pulled her out of the streets. And now we have had her for over 10 years.”

I took a deep breath. Cats live to be about 12-18 years old on average.

Early the next morning

I had to tell my daughter what was happening to Sophie. She didn’t understand why I was suddenly brushing and combing Sophie’s hair and sitting with her all the time. We had set up an encampment in the bathroom next to the heating vent. Apparently cats can get really cold when they go through this. I brought her in some water and cat food. But she didn’t want the hard cat food anymore.

Anyway. I looked at my daughter. We had an online Montessori class to go to. So maybe I could sneak this in, part of me said. And then it just started to come out.

But before it did, I realized I had 2 routes to go. One of the routes involved magical cats in outer space.

The other involved magical cats in outer space.

I sat next to her and looked her in the eyes. Trying to explain.

“Sophie is dying,” I said. Just going for it. “That means she’s leaving us.”

“Well send her to the cat doctor,” Sandy said.

“There’s nothing the cat doctor can do,” I explained.

“But this is a good time to say goodbye to her,” I said.

I kissed her on the head. This was a really good practice for when humans in our lives die, as we all know. It was good for her to see this. To talk about it. And to not be in denial.

After the lesson, we went in the kitchen. My wife was crying and talking to her mom.

Sandy and I noticed this.

“It’s okay, Mom, we can still have fun without Sophie,” Sandy said.

That a girl, I thought, laughing.

“That’s nice of you to make mom feel better,” I said. I grabbed her a bowl of cereal. These girls are ruthless. Heart breakers.

It was important to remember she’s only 4. And she seemed … cool on the outside. I thought about talking about how “none of us gets out of this alive” type of thing but if she wasn’t going to be Woody Allen neither was I. We didn’t have to make this the end of everything because words are important. Like how we repeat how we feel to ourselves.

That’s when my Dad called.

He was chewing on an apple. “So how’s it going?”

“Okay,” he said. “So what else is going on? I’ve started working on the yard a little bit early this year. But that damn weather is so cold…I can’t get to the lawn mower.”

“Dad, Dad,” I said, interrupting him. Somewhat upset. Trying to contain it. “I’m going to let you go. We’re upset over here.”

I hung up. Took a deep breath. It’s not his fault, I said to myself.

We, including myself, we don’t get it when it’s other people’s cats or dogs.

They’re just a cat or a dog.

My friend, Tara told me recently that when she was moving back home to Missoula, Montana, that she didn’t have enough room for all of her luggage because she needed to bring her cat with her.

That’s when, over the phone, her father scolded her. “Why don’t you just leave the cat on the side of the road? You need your stuff.”

But pets are important – they lower our blood pressure, and help us to live longer lives, I bet she wanted to tell him.

Yet I can empathize with these Dads, too. I notice, being a cat person, that there are a lot of slobbering dogs with the snot that won’t let up. When they tell me that that dog is dying, I can’t really relate.

But Sophie? Sophie oh my god.

She’s one of those.

Come back next Saturday for Part 2.