Here at Sunflower Counseling in Missoula, MT – we like to read. Here’s today’s book review of one of the greatest best-sellers of all time in the subject of History and Science. 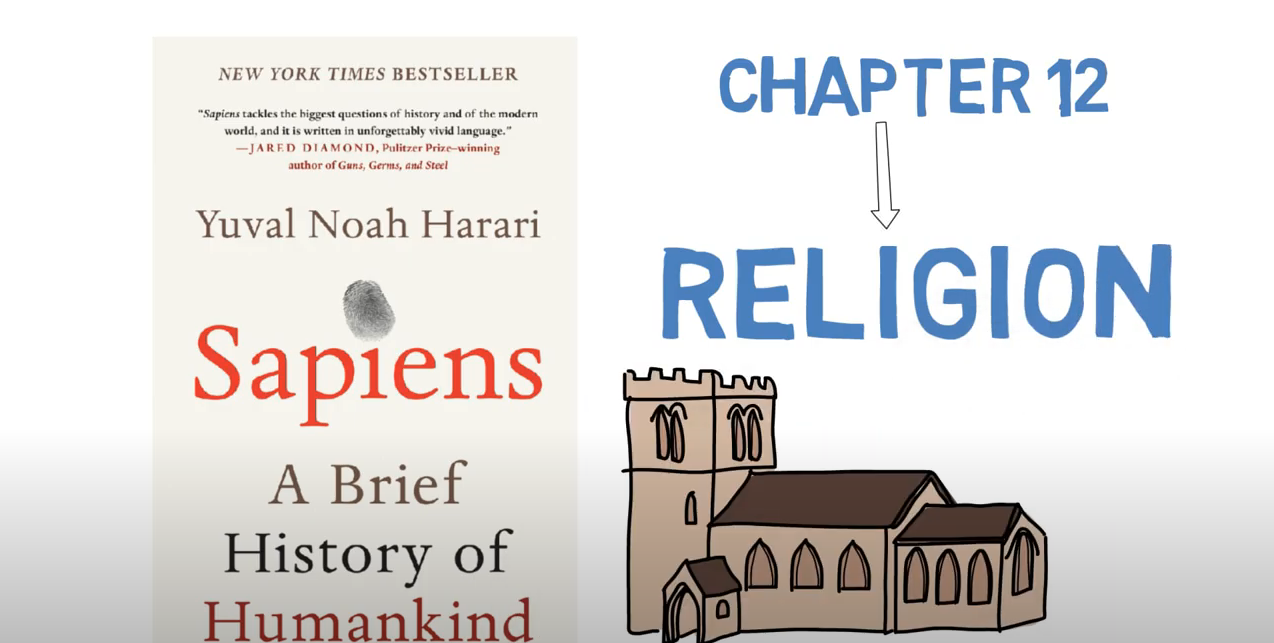 Yuval Harari says that many people feel religion has been a source of disunion and disagreement. Especially in today’s heated political environment! But we can’t ignore how it’s also been an immense unifier. Just as we believe in money and empires – religion has brought people together to overcome great problems both on a personal and societal level.

With this said, Harari says, since all social orders and hierarchies are imagined, or based on belief systems, they are all fragile. And as we talked about in the last blog on “Sapiens” – the larger it is the more fragile it is. And so what religion gives is sort of a superhuman legitimacy to these fragile structures. It’s nice when “God” “blesses” your new big building, for example.

I know I’ve met business owners who have told me that God “told” them to create their business. Or to take certain actions. This superhuman legitimacy that they had of God whispering in their ear gives a sense of authority to complete a task or start a venture. While I’ve not had God whisper in my ear, it would be nice to have someone tell me that “if I build it they will come”.

Religion, Hararis says, can thus be defined as a system of human norms and values that is founded on a belief in a superhuman order.

When animism was the central belief system, (anima in Latin – breath or spirit), the inhabitants of such and such a valley had to be aware of the local superhuman order and to thus adapt their behavior accordingly.

Animism-n. the religious belief that objects, places, and creatures all possess a distinct spiritual essence.

You don’t want to go hang out at the old elm tree with that bizarre old tire swing set if that’s where Freddy is.

In its potential, animism perceives all things through the lense that all things – animals, rocks, handiwork, rivers, socks, pianos, and perhaps even words and air – are animated and alive. (This may not be that far off. Some physicists believe that everything that exists at the fundamental level of reality has a certain network of consciousness. This is called panpsychism.)

I used to actually believe that my elevator was alive. This is no joke! Okay it kind of is. But this is actually a “thing”. Meaning, there are people, I guess, that when they are alone in the elevator, say things like, “Okay, here we are again.” Maybe it’s the idea that this structure is taking us 13 stories above the ground. And so I might do the same thing if I was in an airplane by myself? Like, I’m – or we’re haha – suddenly superstitious just to check all the bases or something?

It’s also interesting that the agricultural revolution was accompanied by a religious revolution. Up until this point the hunter-gatherers may have seen wild plants and animals as equal in status to humans. Thus, “the fact that man hunted deer did not make deer inferior to man, just like bears that hunted man did not make man inferior to the bears or tigers,” Harari writes.

This is because there was a communication, a negotiation – a magical communication between man and animals and other living beings. Whereas, when the agricultural revolution came along farmers owned their animals and plants and who has time to negotiate with that?

But just because the farmers owned their land and their livestock, this did not insure that the sheep would conceive or that the land would remain fertile.

A leading theory about the origin of the gods is that they gained center stage because they offered a solution to this problem. Remember – plants and animals lost their ability to speak – and so they needed a go-between. A mediator. But this wouldn’t be around forever.

The rain god, the fertility goddess, the war god. Zeus, Athena, Hera, Jupiter, the lists go on in culture after culture. Notice how this new structure exalted the gods and humans because we could talk with them. But it really downgraded the plants and animals who unlike us couldn’t communicate with the divine.

But you want to talk about down-grading? Take a look at monotheism. Polytheism was and is inherently open-minded, and rarely persecuted ‘heretics’ and ‘infidels’.  Also take note that when polytheists like the Romans, Egyptians, and Aztecs conquered huge empires, they did not try and convert their subjects. You were expected to respect the empire’s gods and rituals, but you could keep your local gods and rituals.

The monotheistic god of the Christians refused to pay respect to the empire’s many protector gods and to the divinity of the emperor. And there would be no compromise. The Romans reacted to this by killing a few thousand Christians. In contrast, the Christians slaughtered their fellow Christians by the millions to defend, as Harari says, slightly different interpretations of their religion of love and compassion. 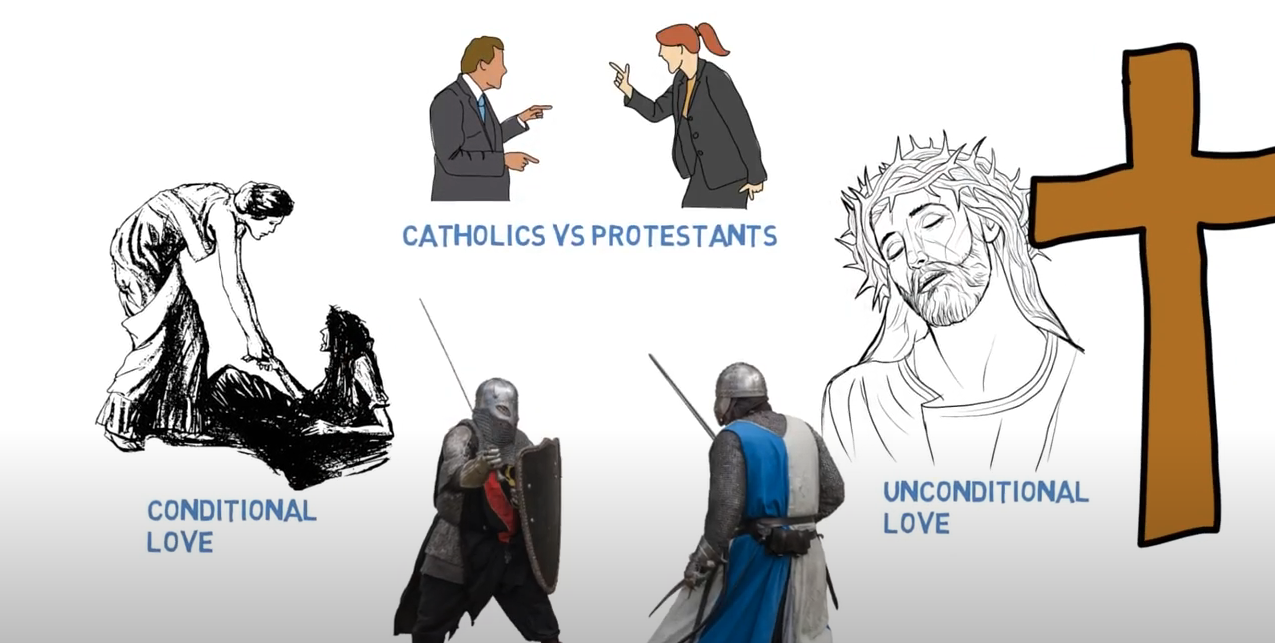 Look at the Catholics and Protestants, they engaged in religious wars between the sixteenth and seventeenth centuries over the nature of what they believed to be God’s love. The Protestants believed that the divine love of god is so great that he was incarnated in flesh and allowed Himself to be tortured and crucified, thereby redeeming the original sin and opening the gates of heaven to all those who professed faith in him.

Catholics didn’t agree. They maintained that faith, while important and essential, was not enough. “Okay kids, if you want to get in to the holy place in the clouds, you have to participate in church rituals and shovel that old woman’s walkway.”

In other words, for the Catholics, it’s conditional, baby.

But Protestants are like, “God doesn’t need a deal. What are you a narcissist? Don’t magnify your own importance by saying you – personally – have to do all these deeds for God. It’s not a transaction. God’s love is unconditional. He’ll accept you regardless.”

“No God’s love is conditional,” the Catholics said.

And so because they couldn’t agree, they killed each other by the hundreds of thousands.

That’s right, our peaceful loving Christians on both sides of the coin.

Like in the St. Bartholomew’s Day Massacre! The Catholics decided to kill somewhere between 5,000 and 10,000 Protestants.

“Oh yeah, you won’t do good deeds?” the Catholics said. “You won’t shovel that old woman’s walkway? Then that means you have to die.”

“But God’s love is unconditional.”

“No it’s not and I’m going to prove it to you with my sword and battle axe.”

The Catholics went on a mass killing spree and slaughtered about 10,000 protestants in less than twenty-four hours.

But it was all in love.

Listen, if the Protestants just said they believed that God’s love meant you have do to good things, then the Catholics wouldn’t have literally murdered 10,000 of them.

I’m reminded of a scene in “Reservoir Dogs” when Mr. Blonde said: “If they hadn’t done what I told them not to do, then they wouldn’t be dead.”

And for some reason none of us talk about this.

I love my Catholic friends.

They seem to have gone crazy in the store but, they seem alright now. 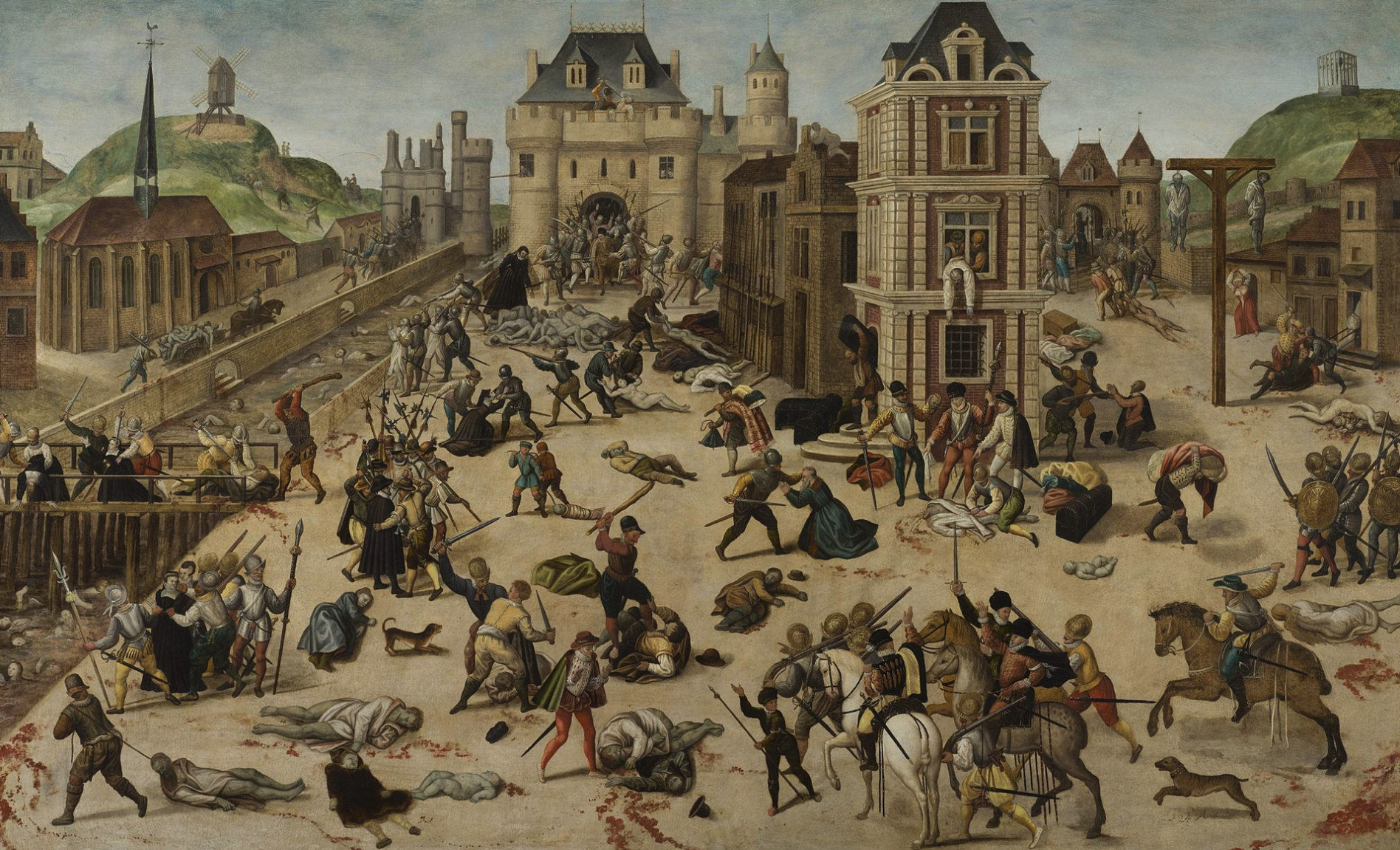 Anyway, the Pope in Rome was so excited after the Catholics killed all the Protestants, that he commissioned Giorgio Vasari to decorate one of the Vatican’s rooms with a fresco of the massacre. Apparently, a lot of these frescos were painted of the massacre. It became a thing. A bunch of Catholic Saints were like, “I need a picture of this. Giant and on the ceiling so when I look up I can see them getting massacred. And I want details.”

I looked for this room when I was in Rome but apparently it’s off limits to visitors. This Pope sounds like a nice guy, right? To him these people, these people who he just massacred, were pure evil.

What does this mean?

So how do we rationalize this in our minds? Are people just people, regardless of religion?

Or, is it just the men? We don’t see the women doing this, let’s get real.

Or, is there something deeper going on, like evil? And if so, what does this mean?

If the latter interests you, and you liked this blog, then you should read his book.

“Sapiens” is available on Amazon.