Why I Love My Cold Baths

How about this as a way to feel amazing? Jump into freezing cold water.

It should be between 34-59 degrees Fahrenheit. This is cold enough to speed up your heart, make you breathe harder, and make part of you think it’s gonna die. Don’t worry though, it’s just a mind game. Have you ever jumped into a really cold river? And then, how did it feel coming out?

The first time it happened to me was up at Lake McDonald.

We were staying up at those little cabins in the Apgar Village. And there is a river that jets right into the lake. It was freezing, but I jumped in anyway. And I hung out there, noticing the little bugs flit around the surface and my head. What is this peculiar sensation?

I just noticed that after jumping in the water I felt better than I ever had. So I did it all day. I was hooked.

Now at my house I have a giant bathtub filled with cold water, attached to a chiller. Currently it’s at 57 degrees, which to me is hot considering that outside has been like, what 13 degrees lately? It’s like a freaking hot tub in comparison.

I have a sauna, too – but I haven’t gone back and forth yet. Somewhere I heard that you can have a heart attack jumping from the sauna into these cold plunges. Then I read somewhere else that the odds of this happening is like 1 in a million. Don’t quote me on this. Regardless I haven’t tried going from my sauna to the cold plunge because of that one article! I just take a break in between.

Plus, according Dr. Andrew Huberman, he says you shouldn’t jump into a sauna after a cold plunge because you want the body to heat itself back up. The sauna is “cheating” and you’ll just get more benefits. With this said I often jump in the sauna though. It’s just fun.

In the case of cold water, she tweeted: 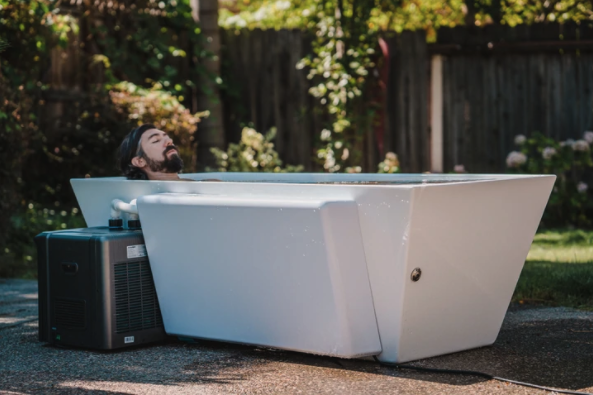 So I go through this cold bath ritual twice a day. Once in the morning and once toward evening. It’s great because it keeps me “on”. There’s no more “feeling bad”. You can’t feel “bad” if you’re sitting in a freezing lake. There’s no “getting depressed”.

“Cold showers can even be used to treat depression,” Dr. Patrick says. “Exposure to cold releases norepinephrine into the brain, where it is involved in vigilance, focus, attention and mood. It has also its role in pain, metabolism and inflammation. This response is mediated by the sympathetic nervous system (fight-or-flight). Norepinephrine can rise 200-300% with cold immersion near 0 celsius for 20 seconds / 3 times a week.”

Norepinephrine is just the fancy way of saying adrenaline.

She continues, “Norepinephrine reduces inflammation through the inhibition of inflammatory cytokines including TNF-alpha (tumor necrosis factor alpha), a molecule involved in almost every human disease from type 2 diabetes to cancer. Inflammatory cytokines also play a role in anxiety and depression, therefore cold exposure may have mood enhancing capabilities.”

This adrenaline, according to Wim Hof, is “medicine”. He uses that adrenaline to focus in on the parts of our body that are inflamed, amongst other things.

If you’ve not looked up Wim Hof, make sure to check him out. Years ago, I remember watching him on Joe Rogan.

Way back then, if I even touched a cold shower with my hand, I would seriously wonder if I was going to faint. I thought there was something actually wrong with my blood pressure. This was because I didn’t understand how other people could jump into cold bodies of water when I couldn’t – my body just freaked out.

So when I saw Wim on Joe Rogan I was immediately taken aback. How is he doing that?

Thus, I ordered his 10 week course and joined the Wim Hof cult. And I haven’t looked back. I hate to call it a cult, but it kind of is, haha. In the course, he gently takes you into the cold showers, just a little bit at a time and you build up strength. Besides being mental, this strength to increase your time in cold showers is also creating an initial layer of brown fat.

Dr. Patrick says, “Cold also activates cold thermogenesis, a way for the body to produce heat. The health benefits of cold thermogenesis are due to the activation of brown adipose tissue (BAT), a form of fat that burns regular fat for heat generation through fat oxidation. This has mitochondrial effects in cranking out more ATP. The more mitochondria there are, the better our aerobic capacity will be. Cold exposure increases the number of mitochondria (mitochondrial biogenesis). The more BAT you have, the better your body becomes in burning fat for energy. Fat loss benefits, anyone?”

My wife has noticed it with me. It’s not a ton, like abs of steel, but it’s enough to “keep things under control”.

A 2011 study using mice found that brown fat fuels itself with triglycerides from the bloodstream. This is the kind of fatty molecules known to increase the odds of getting metabolic syndrome, which are a series of conditions that raise the risk of diabetes, stroke and heart disease. The scientists discovered that brown fat cells draw sugar molecules from our blood, which in turn lowers the risk of type 2 diabetes. In other words, this brown fat is also lowering our blood sugar which causes type 2 diabetes.

Before and After Cold Baths

I used to get sick all the time. At least twice a year. Since this foray into the cold, I never get sick anymore. And if I do, it’s mild. No big deal. And I can actually power through my day. Whereas before Wim, I would be out for a week lying in bed!

While this is awesome, it’s not my favorite reason why I do this. My favorite reason is that I think it makes me a good Dad. This is because I just don’t get “tired”. I’m not like, “Let’s sit around and watch the television” because I worked so hard all day. This is because right around 6pm I’m jumping in that cold freezing water. My adrenaline is increased 530%. And I have this crazy, manic look in my eyes.

“It’s go-time. Who wants to play?” I say, pulling out the trampoline.

I think all Dads should jump into cold freezing water. They’d be less grumpy.

Warning: Do not incorporate breathing exercises with your cold plunges unless you want to risk passing out. It’s best to just jump in and breathe calm through your nose.