Here’s what I learned in Chapter 2 …

The Advent of the Cognitive Revolution 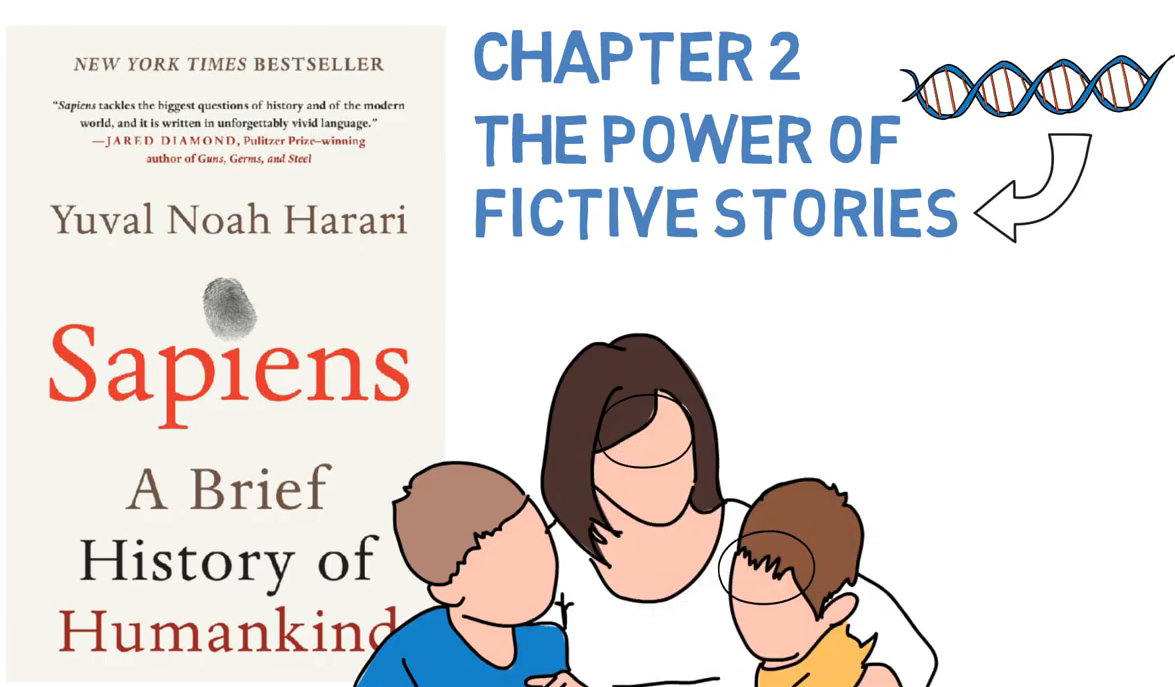 Up until 70,000 years ago, we were being pushed around by our super-smart and big Neanderthal brothers and sisters.  But unfortunately, they just like us, were and are animals. With this said their cognitive abilities were far more limited because they didn’t have this ability to create fiction. Fiction, meaning fictive stories or “imagined realities”.

And it’s this fiction which allowed Sapiens to hypothetically destroy all of the other human species off the face of the earth.  Again, 70,000 years ago. (This is when we see boats, oil lamps, bows and arrows…) 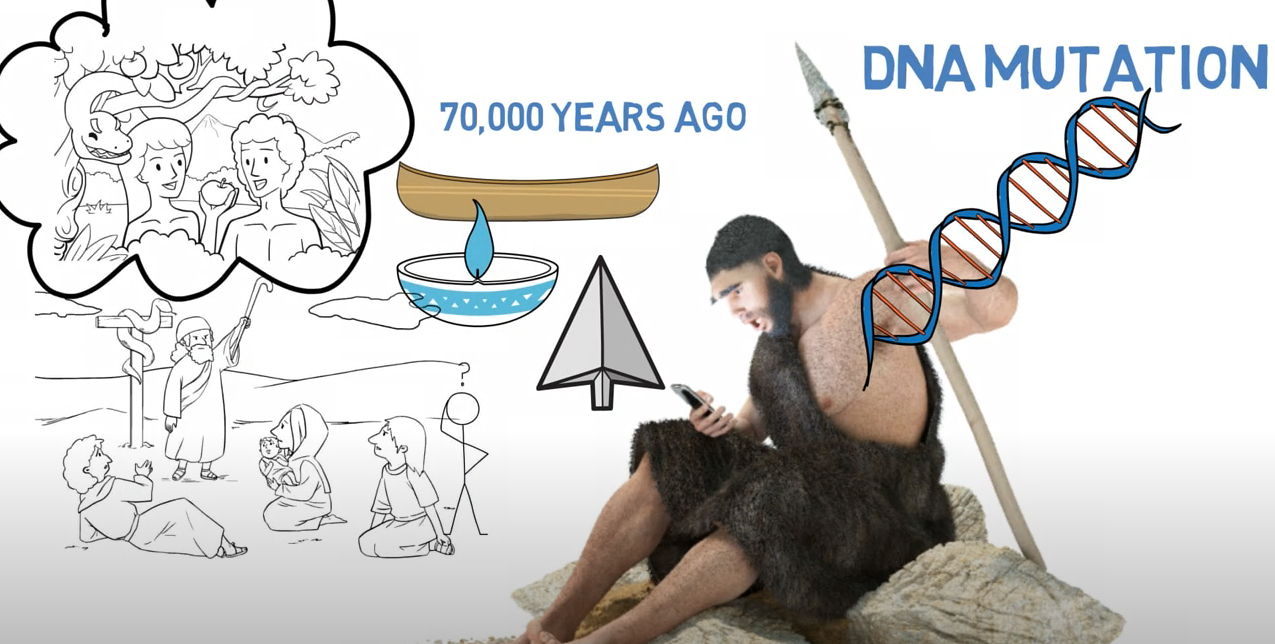 The most common theory is a DNA mutation. A Tree of Knowledge mutation that allowed us to generate and learn fictive stories.

And this fictive language that was acquired by us, the homo sapiens – is different than what we see in the animal kingdom. A monkey can yell “look there’s a lion!” And his buddies will get it. But they can’t quite say “look there’s a lion down by the by the end of Quail River, but don’t worry it’s only 3 feet tall and it’s missing his claws still.”

Antithetically, Neanderthals and archaic homo sapiens could communicate but in that they also had a hard time going into detail, which is so important for bonding. 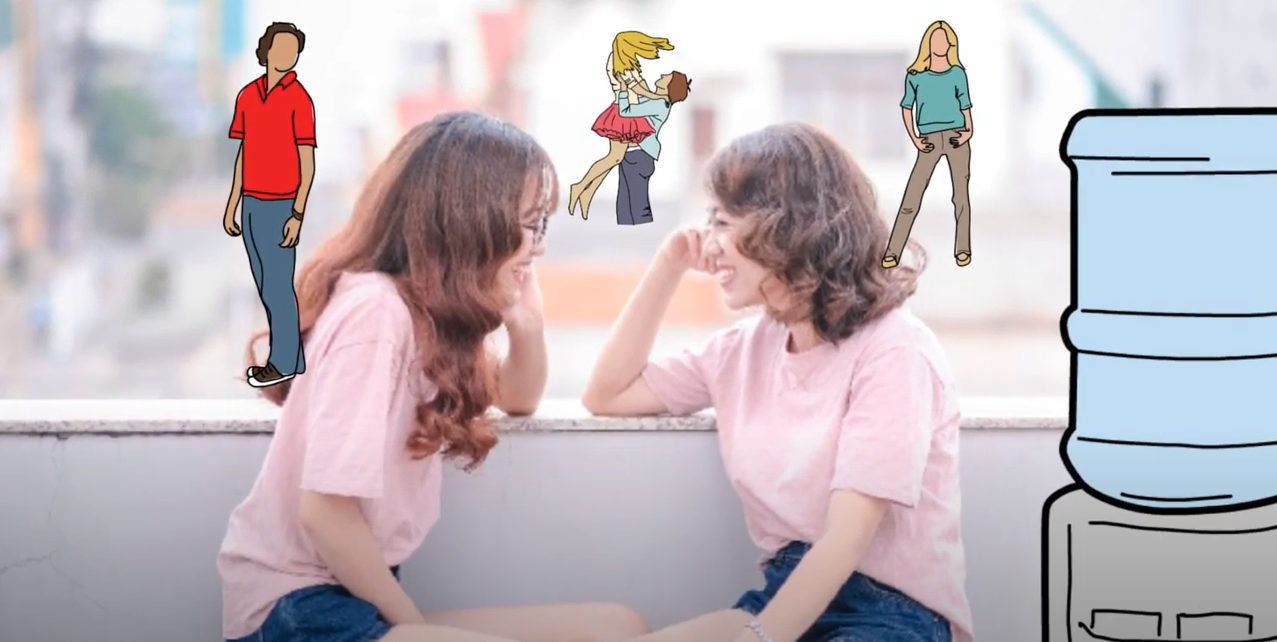 I mean, don’t you and I bond about gossip basically? Who’s sleeping with who? Oh that’s just terrible. But the new linguistic skills that Sapiens acquired allowed this lechery. And not just that but the whole gamut of what is said behind closed doors. And thus, we as a people form tighter bonds and trust with secrets!

Which is all cool.  This is all good.  The gossip theory and look there is a lion theory can only go so far! Both of these theories pale in comparison to our ability to create FICTIVE language.

That is, about things we have never seen, touched, or smelled. Of course we’re talking about legends, myths, and gods. Religion!  Money! Law! And to do so, collectively, meaning that this new ability allows us to suddenly work together in large numbers.

Our chimpanzee cousins live in small groups of several dozen members.  And you and I without our collective fictions, would only be able to work together in a group of up to about 150 people.  Because at that point it would just fall apart!  Don’t let 150 people fool you. That’s a lot of interactions!  For example, in a band of 50 individuals, there are 1,225 one-on-one relationships, and countless more complex social combinations.  But the mind can only handle so much.  This is because in these small bands, these are led usually by an alpha male who has to actually spend lots of time back-slapping and kissing baby chimps. 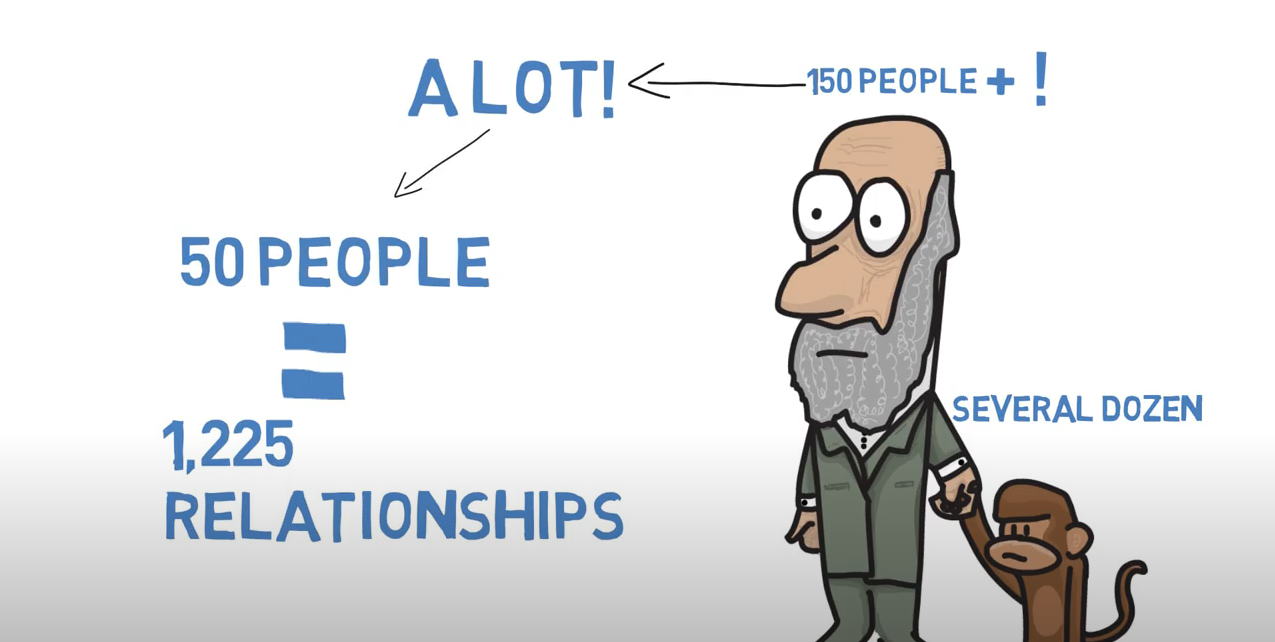 This number of how many people we can work with, or maintain stable successful relationships, is called Dunbar’s Number.

And now I challenge you to ask how many of your 1,000 friends on FB are actually your real friends. Now wheedle that down to 150. Isn’t that a little more accurate? And even then, hehe!

So how did homo sapiens cross this critical threshold, eventually creating vast super L.A.’s and New York’s?  I mean you can put millions of people all together in a city and it runs great. But what would happen if we put millions of chimpanzees in a city?

Why can we homo sapiens surpass Dunbar’s Number?

Large groups of strangers can now cooperate successfully by believing in these myths. There are laws and police and firemen in place. Two catholics can help fund a hospital together because they both believe that God was incarnated in human flesh.  Two lawyers will combine efforts to defend a complete stranger because they both believe in the existence of laws and justice and human rights.

But none of these things exists outside the stories that people invent and tell one another. There are no gods in the universe, no nations, no states, no money, no human rights, no laws, and no justice “outside the common imagination of humans”.

Harari continues: “People easily understand that ‘primitives cement their social order by believing in ghosts and spirits and gathering around a full moon to dance around a campfire.  What we fail to appreciate is that our modern institutions function on exactly the same basis. Modern business people and lawyers are, in fact, powerful sorcerers!”

So to come back to where we started

As far as we can tell, changes in social patterns and the invention of new technologies are not the result of some quirky genetic mutation in and of itself.

In other words, while the behavior patterns of archaic humans remained fixed for tens of thousands of years, Sapiens could LITERALLY transform their social structures, the nature of their interpersonal relations, their economic activities and a host of other behaviours within a decade or two … All by telling fictive stories and creating these imagined constructs and believing in them.

In other words, biology sets the basic parameters for the behavior capacities for Homo sapiens.

It’s “a biological arena”. However, this arena is large and allows us Sapiens to invent fiction, which is basically complex games wherein each generation is building on itself. These stories have allowed us to cooperate effectively in large numbers and to do impossible things.

How can we apply this?

What stories are you telling yourself? Because these stories, as we have proved, are everything to your identity and what shapes how you are. These stories run like CD’s in our minds and tell us about what we are capable of. In many ways they are our interface with the world.

In counseling, we process these stories together. Many are subconscious. And we come up with new, empowering narratives to navigate your life.